The strange case of the Glasgow Tron Church's domain name

Interesting to note that the domain name "thetron.org" which is used to address the web site of the Glasgow Tron Church lists as its owner: 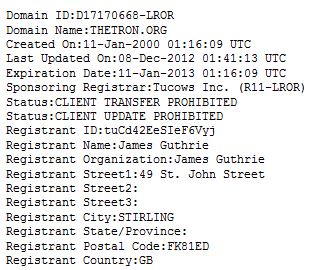 49 St John Street is the closest street number to the Church of the Holy Rude where Rev James Guthrie was the minister and a prominent covenanter. The postal address 49 strictly speaking serves the adjacent Cowanes Hospital.

To find out about the life of James Guthrie click here.

From another web page:

Guthrie accepted the call to Stirling in 1649, where he remained for ten years. During this time his uncompromising stance on his religious convictions led to the physical division of the Church of the Holy Rude into the East and West Churches. On the Restoration of the Monarchy in 1660, Charles 2nd ordered the execution of James Guthrie. As the son of a Laird, James Guthrie had the right to die by the axe rather than the noose, but his sentence condemned him to the gallows. He was hanged in Edinburgh on June 1st 1661, and his severed head was displayed in the Netherbow Port for twenty-seven years until removed by Alexander Hamilton, another Stirling minister. Hamilton found Guthrie’s final sermon in the manse years later; it was published under the title ‘A Cry from the Dead’ by Ebenezer Erskine, the Stirling minister who founded the Secession Church. Guthrie’s portrait, chair, and ring are now in safe keeping at the Stirling Smith Art Gallery and Museum.


It seems that someone is trying to identify with Rev Guthrie.