The day I was virtually slapped by Westboro Baptist Church

So I arrived at work this morning to find police guarding the door. Westboro Baptist Church were in town picketing a conference going on in our offices. Later we had crash barriers outside,  but all I saw were three counter protesters with a dog and a handful of journalists. Apparently three protesters did turn up, but were greeted with apathy. The Westboro people seem to feed off counter demonstrations, but being dour Edinburghers we can't really be bothered with that sort of thing. The Starbucks across the road was busier than the demonstration and nobody over there had even noticed it was taking place.

The day's events ended up with myself and @echurchblog being told by Margie Phelps that we are doomed (via twitter - she wasn't actually here).

According to the Phelps clan there are precious few people who God doesn't hate and most of them appear to be members of the same family! Over here we don't go in for that sort of fundamentalist claptrap. We have bigger issues to deal with and our country is too small to fall out with everyone else.

All I saw was a few counter demonstrators (with a dog) hanging round the door, two policeman and a woman waiting at the bus stop! 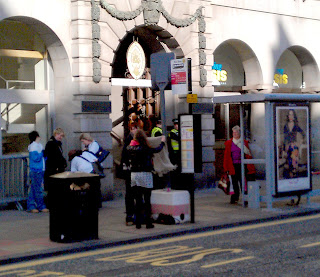