Scottish Cultural History vs The Tartan Tat shops of Edinburgh

Tourists never hear this story. We won’t let them hear it because we think they would not be interested or that we should make Scotland more “contemporary”. Yet, without this piece of history much of the music and dance culture that tourists take for granted in Edinburgh would be quite different.

Niel Gow (1727-1807) and his family were responsible for the collecting, writing and popularisation of many of what we consider to be standard Scottish dance tunes (including Flowers of Edinburgh, Fairy Dance and many others). This is due partly to the business acumen of his son Nathaniel who published his father’s tunes as sheet music from business premises in Edinburgh.

Initially “Nathaniel Gow & Son, Music Sellers to his Majesty” of 60 Princes Street” and later “Gow and Shepherd” of 16 Princes Street.

This article gives something of the history of the firm.

In 1796 Nathaniel Gow entered into partnership with William Shepherd, an Edinburgh musician, and their first place of business was at 41, North Bridge Street, from whence they published many collected pieces and much sheet music. Before 1804 they had removed to 16, Princes Street, and this number is retained until 1810-11, when it is changed (probably by re-numbering the street) to 40.
Shepherd having died Nathaniel Gow found himself in great monetary difficulties and had to make up a large sum to the executors of his former partner. Shortly before 1818 he however entered into business again with his son as " Nathaniel Gow & Son," at 60, Princes Street, and they carried on the trade until 1825, when, the son having died, he shortly afterwards was partner with the firm Gow & Galbraith.
In 1827 bankruptcy came to Nathaniel Gow, and his friends advised him to advertise a ball for his benefit ; it realised a sum of nearly £300. The ball was again repeated in three subsequent years with a like satisfactory result. Besides this he had a pension of £50 a year from the Caledonian Club. He died in 1831.

However, by a strange twist of fate, one of Gow’s old addresses in Princes Street (no 16) is occupied by a “Tartan Emporium”, which specialises in playing drum machine backed techno-bagpipe music to passers by: 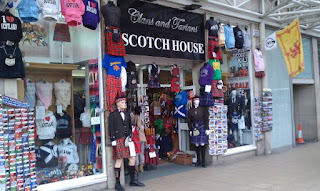 This shop makes no mention of its connection with real Scottish cultural history, but they will sell you a tartan  viking hat: 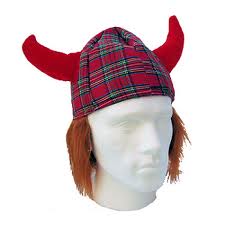 Just for the record, here are the current buildings numbered 60 and 40 Princes Street: 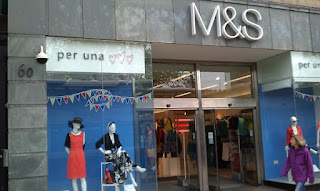 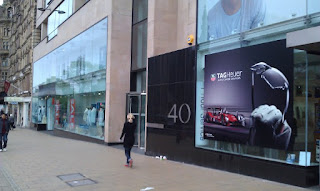