A message for Big Issue sellers 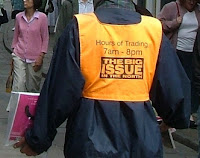 You are selling a product nobody wants.

I know this is going to sound harsh or even cruel, but if you were selling sandwiches, coffee or even pack-a-mac type raincoats you would do much better on the streets of Edinburgh. Even if you sold the Evening News you would sell more copies because people actually want to read it.

Its a basic rule of business that you need to be selling something there is a demand for. Lets face it many people never buy magazines and a lot of the people who buy the Big Issue do so as an act of charity rather than because they like or need the magazine. So why do we like homeless people standing on street corners selling magazines? I can't help thinking that society, in all its liberal fullness, still likes a wee bit of humiliation of those who are not quite as well off in material terms. It makes us feel a bit more secure and when we buy a copy of the Big Issue it makes us feel a little bit better. There has to be a better way for the homeless to help themselves without having to beg people to buy things nobody really wants.

I wrote the above paragraph yesterday and after doing a bit of research it seems I am not the only person who has had the same thought. The Independent Newspaper reported in 2000 a scheme for homeless people in Edinburgh to sell coffee. This scheme doesn't appear to have gone anywhere, but it shows that this is a long standing issue and I am not the first to point at the Big Issue as a poor solution.
Posted by Gordon