Craighouse Gardens Edinburgh - then and now.

The flat I live in is located in one of Edinburgh's most desirable districts, Morningside, but my modern flat is built on a former industrial site. Craighouse Gardens is the western end of Balcarres Street, which still has an industrial feel to it with various workshops and businesses. The old tenements are smaller than most in Morningside because they were built to house the workers in the local factories. These included Mackenzie and Moncur Limited, who operated an iron foundry from here between 1850 and the early 1970's. The company specialised in conservatories and hot houses and built these for many famous hotels and country houses. They also made some of the iron work for the hot houses for the Royal Botanic Gardens in Edinburgh:

Click here to download a PDF document with pictures of the foundry.
Here is a photo of the street as it is now and an equivalent plan of the old foundry. 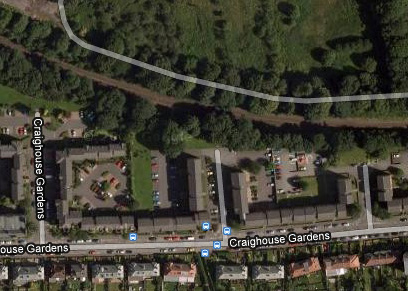 The street must have been renamed Craighouse Gardens at some point. Myerside Road was also renamed  previously it was just a continuation of Craighouse Road.
Posted by Gordon