I went to church 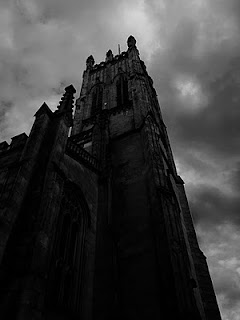 This will surprise a lot of my friends but last Sunday I went to church for the first time in three years. I had been thinking about it for a few weeks, but I didn't feel comfortable going to any of the local churches because I have a relationship with them through my work. Last week I passed by St John's Church in Princes Street and went in to have a look. I know the building very well having played the trumpet there for concerts, weddings and even a funeral, but I had never attended a service there, and not been there at all during the tenure of the current rector. During my visit I had a look at the leaflets on display in the vestibule and it was apparent from this that it was the sort of church that was used to visitors and where I could just pop in and sit at the back. This sowed the seed, and come Sunday I had decided to go.

My one remaining concern was the liturgy. My only previous experience of an episcopal church was quite a high church where everything was in a general prayer book without the specific things for that week written in, so it was a huge relief that when I did turn up on Sunday that everything was printed in a booklet. Firstly because I could understand what was going on, but secondly because I did not feel under any pressure to "perform". My last church experience was in a pentecostal church where there was an expectation that you would express your faith at some stage during the service by speaking in tongues, shouting "amen!", dancing or being generally exuberant. Even as a performer of music I couldn't really get into this style of worship. Maybe thats a wrong attitude in me, but I just didn't feel comfortable behaving like that and Sunday mornings are not when I am at my most lively anyway.

The sermon was preached by the associate rector Rev Donald Reid and was on the parable of the good Samaritan. What I found refreshing was that he was honest about the failure of the church sometimes to help people in need and the marginalised, when I am used to hearing that the church does the right things but it is not understood and discriminated against by a world is full of sin. The other thing which stood out was that the sermon was not long enough to send me off to sleep. Previously I have been used to sermons that last 45 minutes or longer. This one must have been about 15 minutes long (although I did not actually feel the need to look at my watch). There was also no exhortation that we must all try harder in our Christian lives, which can be a strong theme in evangelical preaching. This is normally framed in terms of: Jesus did so much for you, what are you going to do in response in the way of donating money or time to the church? Maybe not as blatantly as that, but its usually a strong inference and it can be very difficult if you are already stretched to the limit by every day life. It was nice to not hear that sort of thing underlying a sermon.

Overall I was left with the impression of Rev Reid's sermon that although I don't believe in God I could believe in HIS God.

I did not take communion because I don't currently believe and I would not really know the correct procedure.

Afterwards I stayed for coffee and was approached by another visitor who was most insistent that I should attend Charlotte Chapel because they teach from the whole bible with certainty. Maybe it was serendipidous that this person had approached me. I know the damage that that type of teaching has done to me in  the past and I also know that my marital status would make attending such a church impossible. I also don't think that anyone is really totally certain about anything. They might claim to be, but faith is different from belief (as I wrote about recently).

My impression of St John's Church was that it seems like the sort of place where there is space to think. A place where I could discover God without feeling the need to measure myself against an idealised standard of faith and where there was no need for absolute certainty. I will certainly be back as I found it a very positive, though challenging, experience.


Related articles:
How I lost my faith.
Posted by Gordon