I don't seem to have much luck with telecom companies. Every time I move house I seem to end up in the twilight zone and this move has been no exception.

I own two properties a flat and a house. The flat had BT Broadband, the house Virgin Media cable. Virgin are using traffic shaping which means that if you stream a movie for more than an hour in the evening they cut your speed from 20 mbit to 1.5 mbit and the film starts buffering. This was not the case with my BT ADSL at the flat which was always a steady 12 mbit. The Virgin modem was also at the wrong end of the house and needed moved. As I was not using the internet at the flat I decided to move the BT service to the house, get the router in the right place and then discontinue Virgin at a future date. Nothing difficult in this as there as already a disused BT socket in the correct place in the house and it was in use until quite recently as a business line.

When I placed the order BT wanted to charge a reconnection fee, but offered free connection if I switched to Infinity. I As Infinity 2 was only £2 more than my current monthly bill I decided to go for this upgrade and placed the order on 31st January.

Here is how events have unfolded since then:

13th February
Router arrived in the post. It would have fitted through the letterbox, but postman rang the bell. Unusually I was in. Just as well.

14th February
Engineer arrived.
Got service working to the cabinet, but was unable to find a circuit that was working between the cabinet and the pole outside the house. Had to refer it to another type of engineer.

18th February
Phoned BT.
Told it would be completed on 20th, engineer to call between  1pm and 6pm.

20th February
Engineer came, put a tracer on, took it away again. Still no service.

21st February
Phoned BT
Told that engineer would call on  the 24th to complete the installation. Was promised one month free as compensation plus credit on my bill for the days the service was not active.

24th February
1:57 text to say there was a delay due to engineers dealing with storm damage and engineers visit was cancelled
2:30 I went out
2:45 Engineer put card through door to say he had come.

I think this was the point where their provisioning process could no longer cope with my situation.

I phoned and was promised an appointment at a time that would suit me. I said that Friday 28th was the only time I could do.

26th February
Call from India saying engineer appointment would be Thursday 27th. Apparently the Friday was impossible for some reason. The person did not understand my previous agreement with BT about this.
I reluctantly accepted the Thursday 27th appointment on the basis that this would be it finally fixed. BT confirmed this by text and email to me:

Hello - This is a message from BT. This is to confirm the engineering appointment to install your broadband service is on 27/02/2014. Your order reference number is VOLxxxxxxxxxxx  Thank you for choosing BT


27th February
Engineer did not turn up.
Logged into bt.com order tracking system and it said appointment was for 13th March!

Phoned BT and they confirmed that email and text refering to appointment on 27th had been sent in error. I complained and issue was escalated to a manager. They said they would contact me between 8am and 8pm on Friday 28th to arrange a specific time for an engineer so I would not have to take time off work again.

28th February
No call from BT.


It is now 15 days past the original installation date and I still have no broadband.

I will update this article as the story unfolds.

1st March
Called BT, they said they had been unable to contact me by phone. Arranged appointment for Tuesday 4th March.

4th March
Checked online and appointment listed for today between 1pm and 6pm. However, activation not scheduled until 13th March, which will be four weeks since the original activation date. 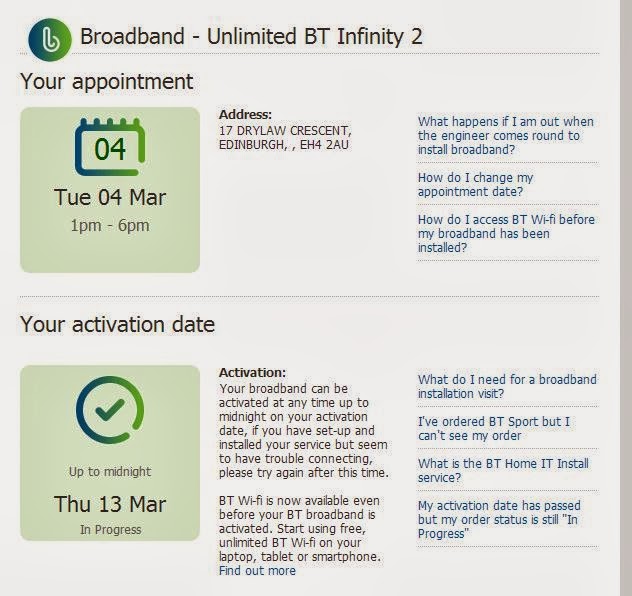 4th March
Engineer called at 1:45pm to say there were no notes so could I explain. I explained the whole story. He came round and tested it and it was all working at 68mbps. He didn;t see any reason for a 13th march activation date so he got me to  I plug the router in and do the initial sign on.

It has never given me more than 25mbps. It has varied a bit during the settling in process and is currently:

Compared to my other line:

However, there is no traffic shaping in force so I can stream movies no problem in the evening.

The speed issue is probably down to the poor overhead wire quality. I am not sure I have the energy to argue with BT at the moment over this. I may take it up in the future as from reports I have seen there are few people getting less than 50mbps on Infinity 2.


8th March
Contacted by BT Care who had seen my tweets and offered direct help to resolve it which I intended to follow up with on Monday 10th.

10th March
Tested the speed and was getting 74 mb/s download and 18 mb/s upload.

As the problem has resolved itself for now I have responded to BT that it is fixed.


Overall Results
Even at the lower speed I was not getting any reduction in speed when streaming movies. I have been able to use Netflix, Lovefilm and iPlayer on full HD without any buffering at any time I wanted to (using Xbox 360 through a wired ethernet connection). This is a huge improvement over Virgin Media cable. I have also had fewer problems connecting to XBox Live.