This is the summary of my research into Douglas & Son, brass musical  instrument makers of Glasgow.

My interest in Douglas and Son started when I acquired a cornet with the company name engraved on it several years ago. I had never seen an instrument with a Scottish maker's mark so I had it restored to a playable condition. The bell is engraved Douglas & Son Ltd, 66 Brunswick St, Glasgow. It is a high pitch cornet that has been converted to low pitch at some point. I originally thought it was made in the 1880's but my research into the company name show it is probably post 1908 although the style is earlier. Here are some photographs from before and after the rebuild: 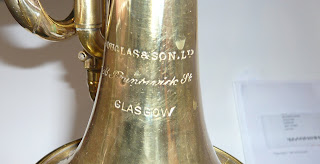 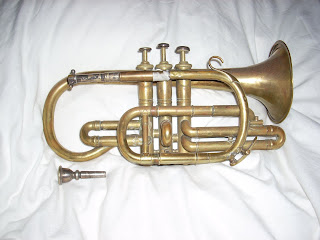 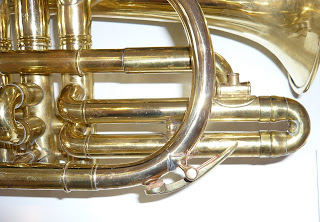 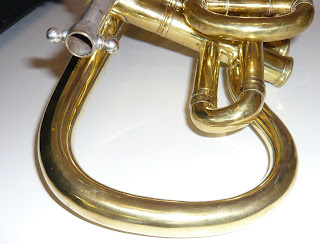 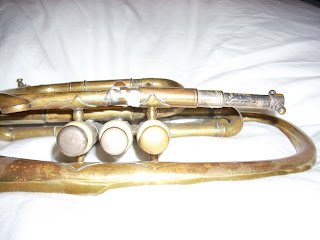 Other Examples
There is a similar cornet in the collection of Edinburgh University marked "Douglas and Son" which they date to "1860 probably c 1872". This company name does not match any of the ones I am able to date, but my hunch is that their instrument is closer to 1907 as the earlier ones reference Hugh or H D Douglas. Mine must be post 1907 as it has Ltd in the company name, but is built in the earlier style.

Kelvingrove Art Gallery and Museum in Glasgow used to have a Douglas cornet listed in their collection, but it is not currently showing up in their online archive.

The story of Douglas and Son
Hugh Dow Douglas was a musical instrument maker who started his business around 1850 at 190 Trongate, Glasgow. His company made or sold a variety of woodwind, brass and bagpipe instruments aimed at the military and growing civilian wind band market. Douglas himself was a brass player and is listed as bugler to the 1st Lanarkshire Rifle Volunteers. The 1st Lanark had a bugle band, but by 1887 it had  become a brass band under Mr Robert Strachan and promoted to the 1st Battalion, replacing the pipe band who were demoted to the 2nd. The 3rd Lanark didn’t have a band. They had a football team instead, which went on to become quite famous. Its probable that Hugh Douglas started in the bugle band and moved into the brass band, possibly even supplying some of the instruments.

Douglas seems to have been something of an entrepreneur and saw the potential for the new brass instruments to supplant woodwind instruments in civilian bands as a money making opportunity. In 1862 he organised and sponsored the first brass band contest in Scotland (known as H D Douglas' Contest) with a series of further competitions in 1864 and 1865. The top prize was £77 -  equivalent to £1600 in today's money.


Credit is due to the late Mr. H. D. Douglas, musical instrument-maker, Glasgow, who was Field Bugler to the 1st L.R.V., for having attempted to do something for the improvement of these bands while they were still brass bands. He organised contests in 1862,1864, and 1865, with the view of "increasing the efficiency of the Volunteer and other bands in Scotland.
(Music for the people: a retrospect of the Glasgow international exhibition, 1888, with an account of the rise of choral societies in Scotland, Robert A. Marr 1889 (reprinted in The British bandsman: the official organ of the National Brass Band Championships, Volume 1, Issue 24 quoted in this article).

However, later in 1862 something appears to have gone wrong and he was in debt with his assets subject to sequestration (notice from the Edinburgh Gazette):

Maybe he was one of the first promoters of brass band contests to find out that there was no real money in it? This not withstanding, his business continued and by 1870  included his son at expanded premises 36-38 and later incorporating no 42 Brunswick Street. Then in 1908 the firm moved to 66 Brunswick Street.

Entry for Hugh Douglas in the 1866-1867 Post Office Glasgow Directory - note his home address is listed as 25 Main Street, Gorbals: 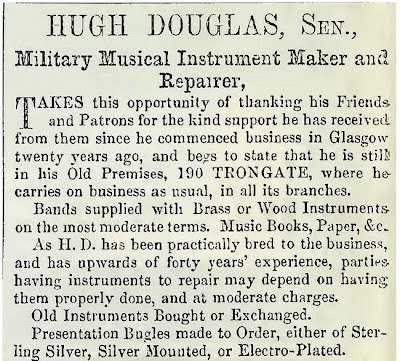 His display advertisement from the 1875 Glasgow post office directory: 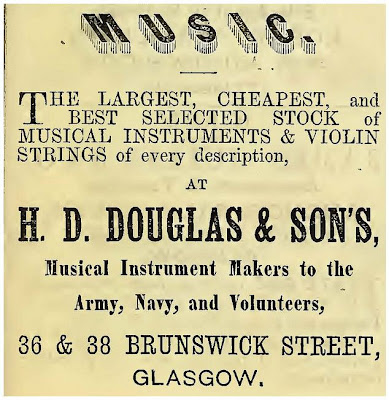 Display advertisement from the 1893 Glasgow Post Office Directory (Hugh D had died in 1887 and the business was now run by his son): 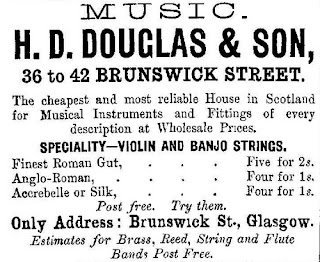 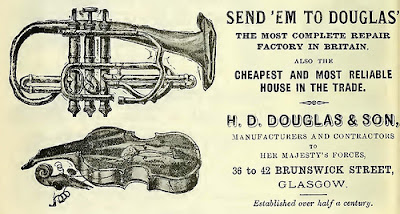 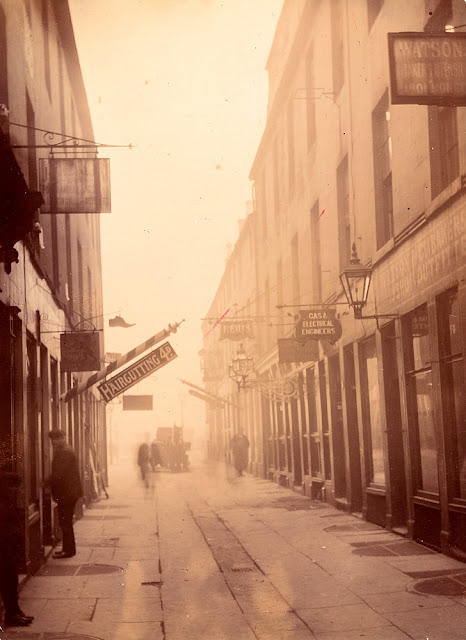 A shop sign carrying a representation of a bugle and other musical instruments is just visible in the distance: 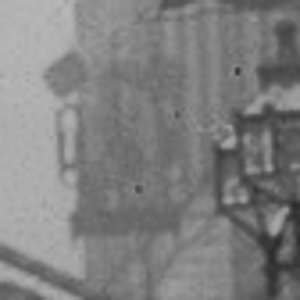 By the onset of the first world war the company was mainly producing bagpipes and seems to have stopped trading totally around 1920.

Manufacturer?
Its not clear if Douglas & Son made brass instruments themselves or just marketed other peoples. His premises were rather small and although that does not preclude manufacturing of small instruments, manufacturing the full range of larger instruments he sold would have been difficult. At the time of Hugh D Douglas' death in 1887 he was selling instruments made by Thibouville Lamy of France (according to his will which lists a debt to that company), but he also owed a debt to an electro plating company in Glasgow so he must have been repairing or manufacturing something.

The cornet I have is very similar to French models of the late 1800's and Douglas were agents for Millereau of Paris (who also manufactured the Arban brand cornets). Its possible my cornet was made for Douglas and sold with his name on it. Against this theory is the fact that many Millereau instruments exist with the Douglas name engraved on them as supplier. I have only seen cornets and trombones made by Douglas which may indicate that he only made these smaller instruments.


Genealogy of Hugh Dow Douglas
I undertook this work to try and determine who the son was in Douglas and Son.

Hugh died in 1877 and many of his children died in infancy. He had two surviving sons:


Both were too young to have inherited the business on their father's death, but his daughter was 24 and may have continued the business until they were old enough. John Gray Douglas is listed in the 1881 census as a "music seller" so it seems that he is likely to be the "& Son".

According to his will lodged in the Glasgow Sheriff Court Hugh D Douglas died with debts including:


His main asset on death was his shop stock, worth £689. His cash in hand was insufficient to pay for the funeral. The business was inherited by his wife along with the rest of his estate.

Other information
Here is a clip of me playing my Douglas and Son Ltd cornet: