What is the difference between a trumpet and a cornet? 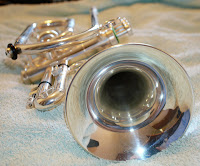 Cornets and trumpets developed from different origins. The trumpet developed from the natural trumpet, which eventually had valves added to it. The cornet is derived from the french post horn which had stoelzel valves fitted to become the cornopean, before having modern valves and becoming the cornet. The cornet had valves about 30 years before the trumpet did. The cornet was always in higher keys such as C, Bb and A. The first valve trumpets were in F or E or Eb (lower pitch than a modern Bb trumpet). At this point trumpets had a greater proportion of their length cylindrical bore compared to the cornet which was more conical, but when trumpets started being built in Bb and A (the same pitch as cornets) there was very little difference in these proportions. Some of the earliest Bb trumpets were originally sold as "cornets" because trumpet players were not keen on moving from the big F trumpets they were used to. Manufacturers then started making Bb trumpets made to look like F trumpets with false, unconnected, tubing to make them look bigger.

I recently measured three cornets and a trumpet to see how much of them was conical and cylindrical bore. You can see the results here. The differences were marginal. The main difference is the shape of the bell flare and how it flares out rather than the proportions of cylindrical to conical bores. Long model cornets have bells more similar to trumpets. Some trumpets (e.g. the Wild Thing) have bells which are more similar to cornets.

Update: Someone has drawn my attention to this article and its accompanying measurement chart which seems to support my assertion that the proportion of cylindrical to conical is not significantly different between trumpets and cornets.
Posted by Gordon