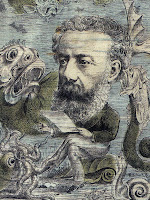 Anyone reading the better known novels of Jules Verne will notice the references to Scotland and particularly Edinburgh. Verne was a prolific novelist, but nowadays we only see three or four of his novels regularly and most of these are  his futuristic novels.  For someone living in 19th Century France, Verne had an unusually detailed knowledge of Scotland and this seeps out into his better known novels. Surprisingly he even wrote three novels set in Scotland (although they were not translated into English until the early 1990's).

Here are some notes on the Scottish influence on Verne's writing.

Five Weeks In  A Balloon
This was Verne’s first published novel from 1863 (Google Books copy).

20,000 Leagues under the sea
The interior of the submarine Nautilus is said to be based on the interior of Abbotsford House, which Verne had visited during a holiday in Scotland as a homage to his literary hero Sir Walter Scott. The name of Captain Nemo (latin for nobody) was apparently suggested by the motto on royal crest on Edinburgh Castle which is also not unlike the character of Nemo himself (Nemo me impune lacessit - “noone can harm me unpunished”).


“All my life I have delighted in the works of Sir Walter Scott, and during a never-to-be-forgotten tour in the British Isles, my happiest days were spent in Scotland. I still see, as in a vision, beautiful, picturesque Edinburgh, with its Heart of Midlothian, and many entrancing memories; the Highlands, world-forgotten Iona, and the wild Hebrides. Of course, to one familiar with the works of Scott, there is scarce a district of his native land lacking some association connected with the writer and his immortal work” Verne Quoted in M. A. Belloc, Jules Verne at Home, Strand Magazine, February (1895)

Quebec
Verne’s affinity with Scotland seems similar to his affinity with Quebec (about which he wrote several non futuristic novels, the best known of which is "The Fur Country"). Verne did not like imperialism, especially British imperialism and although his writings display a lot of racial stereotypes they do promote the right to self determination.

Verne’s Scottish Novels
Verne actually wrote three novels set in Scotland and based on his own travels:
There is a very informative article about these novels here;
http://jv.gilead.org.il/ithompson/geography.html

In addition to this his novella The Blockade Runners is about a Scottish ship breaking a blockade during the American civil war.

Update
It appears I am not the only person interested in Verne's connections with Scotland! Amazon has a book listed for publication this August called Jules Verne in Scotland by Ian Thompson.

A BBC Article about The Underground City.
Posted by Gordon