The best opening paragraphs of any book 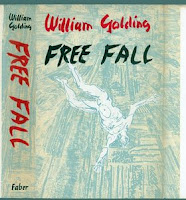 I realised yesterday that I have not written a proper article for a few weeks. Partly because I have had a lot of technical tips to write up, but also because of my work schedule - over the past week I have spoken at two evening meetings and only had one evening at home. Now that I have an early Sunday morning and some of my favourite Fair Trade Columbian in the coffee machine its time to write about my favourite book and what I think is the best opening page of any book.

Few people know this book. It is a short book, only 253 pages, and it has never been on a best seller list or sold in a supermarket. Yet Free Fall by William Golding has remained my favourite book for more than twenty years. Like most of Golding’s books the central theme is descent from a state of innocence to a state of ambivalent morality brought about by circumstances rather than choice.

Free Fall speaks to me because the central character, Sammy Mountjoy, is rather like me. An artist who has tried both politics and religion, he undergoes trials outside his control and finally recognises the pattern of cause and effect. I am not quite as fatalistic, and I have not been to war, but I had my own search for meaning in politics and religion before finally understanding that what happens to us is mainly down to our own choices. We should make the most of those choices while we can.

The book is written entirely in the first person. The opening page is a remarkable piece of writing which still draws me in after numerous readings:

I have walked by stalls in the market-place where books, dog-eared and faded from their purple, have burst with a white hosanna. I have seen people crowned with a double crown, holding in either hand the crook and flail, the power and the glory. I have understood how the scar be­comes a star, I have felt the flake of fire fall, miraculous and pentecostal. My yesterdays walk with me. They keep step, they are grey faces that peer over my shoulder. I live on Paradise Hill, ten minutes from the station, thirty seconds from the shops and the local. Yet I am a burning amateur, torn by the irrational and incoherent, violently searching and self-condemned.

When did I lose my freedom? For once, I was free. I had power to choose. The mechanics of cause and effect is statistical probability yet surely sometimes we operate be­low or beyond that threshold. Free-will cannot be debated but only experienced, like a colour or the taste of potatoes. I remember one such experience. I was very small and I was sitting on the stone surround of the pool and fountain in the centre of the park. There was bright sunlight, banks of red and blue flowers, green lawn. There was no guilt but only the plash and splatter of the fountain at the centre. I had bathed and drunk and now I was sitting on the warm stone edge placidly considering what I should do next. The gravelled paths of the park radiated from me: and all at once I was overcome by a new know­ledge. I could take whichever I would of these paths.
There was nothing to draw me down one more than the other. I danced down one for joy in the taste of potatoes. I was free. I had chosen.

How did I lose my freedom? I must go back and tell the story over. It is a curious story, not so much in the external events which are common enough, but in the way it presents itself to me, the only teller. For time is not to be laid out endlessly like a row of bricks. That straight line from the first hiccup to the last gasp is a dead thing. Time is two modes. The one is an effortless perception native to us as water to the mackerel. The other is a memory, a sense of shuffle fold and coil, of that day nearer than that because more important, of that event mirroring this, or those three set apart, exceptional and out of the straight line altogether. I put the day in the park first in my story, not because I was young, a baby almost; but because freedom has become more and more precious to me as I taste the potato less and less often.

I have hung all systems on the wall like a row of useless hats. They do not fit. They come in from outside, they are suggested patterns, some dull and some of great beauty. But I have lived enough of my life to require a pattern that fits over everything I know; and where shall I find that ? Then why do I write this down ? Is it a pattern I am looking for? That Marxist hat in the middle of the row, did I ever think it would last me a lifetime ? What is wrong with the Christian biretta that I hardly wore at all ? Nick's rationalist hat kept the rain out, seemed impregnable plate-armour, dull and decent. It looks small now and rather silly, a bowler like all bowlers, very formal, very complete, very ignorant. There is a school cap, too. I had no more than hung it there, not knowing of the other hats

William Golding's work is overshadowed by Lord of The Flies. Its place on the school curriculum means that many will never read his other novels, but set this aside. If you have not read Free Fall you owe it to yourself to get a copy and find out what happens to Sammy Mountjoy.