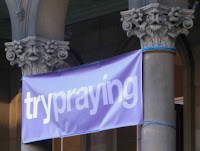 Following on from the Alpha course my local churches are now sporting “Trypraying” banners as a way of encouraging people to engage with the church.

Trypraying is based around a booklet which a Christian can give to someone which encourage them to pray over a set time period. You can download a copy of this booklet on their website. The premise is that if you do try praying and something happens that this is evidence that God exists and that the claims of Christianity are true. Whats not to like?

Well there are a few obvious problems with this strategy:


Not that any of this will put off the churches who are promoting Trypraying. Like Alpha it is a well packaged campaign which has momentum behind it and which can be easily plugged into any church. This impetus means that few will question its methodology or its likely results.
Posted by Gordon