The story of Whistling Billy 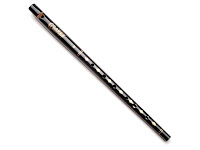 The tin whistle was invented in 1843 by Robert Clark, an English farm labourer. He sold his instruments by touring round local markets making his instruments at his stall and playing tunes himself as a demonstration. The tin whistle (or penny whistle) became very popular with the poor because it was an instrument they could afford (costing much less than a penny - the first ones were a quarter of a penny). Some people found that they could earn some money from busking. One of the finest exponents was "Whistling Billy" of London who was interviewed by Henry Moore for his 1861 book London Labour and the Poor:


When I goes into the public-houses, part of my performance is to play the whistle up my nose. I don't do it in the streets, because if I did there'd be thousands looking at me, and then the police would make a row. Last night I did it. I only pitched at one place, and did my night's work right off. I took 4s 3 1/2d and lots of beer in an hour, from the cabbies and the people and all. At last the police told me to move on. When I plays the whistle up my nose, I puts the end of it in my nostril, and blows down it. I can do that just as easy as with my mouth, only not as loud. I do it as a variety, first in my mouth, then in my nose, and then back again in my mouth. It makes the people laugh. I've got a cold now, so I can't do it so well as at times, but I'll let you see what it is like.

You can read the full story here in Google Books.
Posted by Gordon