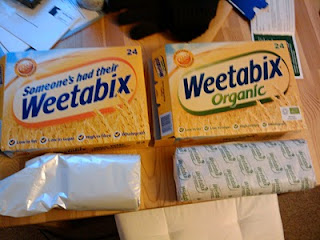 Having just bought a box of Organic Weetabix I have found that the internal wrappers are made of paper (and therefore recyclable) where the standard Weetabix has plastic and is marked "not currently recyclable ".
Weetabix used to have paper wrappers, but went plastic at some point in the 1990's. Why is the organic version now paper? There can't be a different packaging requirement so my guess is that in order to sell to the sort of person who buys organic products the packaging has to be 100% recyclable.
I could be wrong though. Does anyone from the manufacturer want to comment?

Update 01/01/2011
I found a thread on another blog here discussing packaging so decided to email Weetabix to ask them. Within 24 hours (and on New Year's eve) I received the following response by email:


Many thanks for your comments about the paper packaging. We conducted a short-term trial earlier this year on two of our 11 production lines to test the feasibility of returning to paper, which we used quite a while ago prior to changing to the film which has become the norm over the past 15 or so years. The trial has been concluded, so we are back to film and are assessing our findings on how it ran in the factory and, very importantly indeed, how our customers react when they find their biscuits wrapped differently.Your vote is clearly a positive one, and I have recorded it as such. You are definitely part of our market research! Ultimately, we may make the change but the jury is still out, so to speak. I can make no promises except to say the subject is very high on our current agenda. Thank you again for taking the time to contact us.

So now we know.
Posted by Gordon