How my ancestors named part of Kirkcaldy

Earlier this week I was reminded about the area of Kirkcaldy known as St Clair and wondered if there was a connection with my Sinclair (St Clair) ancestors. I have been doing a bit of digging and it seems that there is and that St Clair is named after them.

According to the Gazetteer of Scotland by Robert & William Chambers, Edinburgh, 1844 p268 (the entry for Dysart):

The most remarkable object of antiquity near the town is the castle of Ravenscraig, situated on a rock, projecting into the sea, at the east end of Kirkcaldy. It, with the lands adjoining, was given by James III. to William St. Clair, Earl of Orkney, when he resigned the title of Orkney. It has ever since been possessed by the family of St. Clair. It was inhabited in Oliver Cromwell's time, and was fired upon by a party of his troops. It has, for many years, been uninhabited and in a ruinous state. 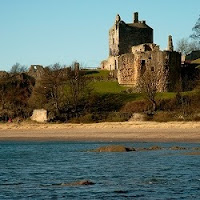 You can read the history of Ravenscraig Castle here.

The area of St Clair in Kirkcaldy is also known as Sinclairtown or Sinclairton and includes street names like Rosslyn Street, Caithness Place and Sutherland Place which all relate to places important to the Sinclair family of that time. Click here for a map.
Posted by Gordon