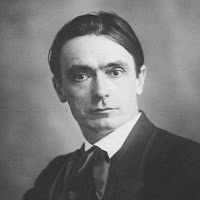 On my travels around Edinburgh I keep seeing references to Rudolf Steiner. I did wonder if this was just the result of studying Steiner at university making me more adept at spotting Anthroposophical references, but after a bit of investigation there does seem to be a thriving interest in Steiner in south central Edinburgh.

My own awareness of Steiner began when my dad started working as a volunteer physiotherapist at Camphill Blair Drummond. This led to me helping out with some musical activities their including a memorable performance of Bach’s Christmas Oratorio with a choir, and part of the orchestra, formed from people with learning difficulties who were part of the community there. This gave me a bit of an insight into some of the values behind Steiner education especially that each individual has a perfectly formed spirit regardless of external disabilities which is the reverse of the protestant Christian idea of original sin. I have always been impressed by the kindness and love of the Camphill people and the way in which they accepted me into their community as a visitor as if I was simply meant to be there at that time. Its a very special place.

I went on to study some aspects of Steiner as part of my Divinity degree. Not sure how I managed to squeeze that in, but I can remember trawling through the stack rooms at New College for dusty copies of original journals edited or written by Steiner.

Here are a list of organisations, web sites and establishments associated with Steiner education or Anthroposophy in the Edinburgh area. The Steiner influence is quite widespread. I thought I would publish it here in case anyone else goes looking for the same information.
Another list of Steiner related organisations in this area can be found here.

Note: This is my 200th article in this blog.

Update 20th August 2013
The Edinburgh group of the Anthroposophical Society has changed its name to "Anthroposophy in Edinburgh".

The Anthroposophical Library has moved from the Columcille Centre to the Christian Community.