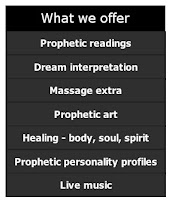 In another of my expeditions into the wilder reaches of Christianity I came across a Scottish organisation called Light and Life who you can find on the internet here: www.lightlife.org.uk.

This organisation attends community events and run fairs which are similar to psychic fairs but based on apparently Christian principals. Their web site describes one of their forthcoming events:

It really does sound like a psychic or new age fair. Its hard to see what any of this has to do with Christianity. The image above is a screen capture from their web site and yes, it actually does say "massage extra". Presumably they have led much more sheltered lives than I have or they might have chosen better phrasing.

Who is behind it?
Light and Life has quite a few volunteers and an advisory board which has members from Healing Rooms, CLAN, Pray for Scotland and YWAM. After a bit of further digging around I found that they share a number of people in common with Glasgow Prophetic Centre which runs prophetic mentoring schools and is itself is closely associated with Sharon Stone and Glasgow Elim (a church which promoted the Lakeland Revival and which is closely associated with the Toronto Blessing).

Their intention is to expand Light and Life to every town in Scotland, so its coming to a town near you soon, presumably.
Posted by Gordon